I recently attended couple of Conferences at the CWW Expo held in New York during November 14 and 15, 2012.
There I was one conference in particular that I didn't want to miss:

Digital Cinema - Past, Present and Future

With the amount of cameras hitting the market, I felt that I could use some pointers, and they had a couple of new digital cameras that I wanted to take a look at, the Bolex and the Black Magic. Yet two more alternatives to choose from the myriad out there.

I don't consider myself a DOP, but if I'm pushed I can do the cinematography of a project and, mostly I am obsessed with the image of my projects .

In the pre digital age, there were very few cameras to choose from. There were not a lot of of film emulsions but there were a lot of  lenses. and post production was expensive.
The possible combinations were really not too staggering.

The workflow of the digital cinema is one of constant creativity and choices, from the acquisition of images all the way to the compressions and the enormous resources of post production within anybody's grasp. So now the amount of possible combinations for the handling of images is staggering, and they start with cameras that acquire those images.

So the question arose during the conference: Which is the best digital camera?

Many answers, almost as many as the number of cameras out there, and with new ones coming out every other day,  DOP’s, producers, and Directors could have a never ending discussion trying to answer which camera is the best.

The panel  all agreed that the decision of which camera should be used has to be made by the DOP.

Of course the DOP's would agree.

I did not agree.

To begin with, I think that  the question should be:

Which is the best camera for my project?

I do not really need an Alexa for something that is going viral on the internet.

And something that has changed the role of the DOP is the work flow of the digital era, in which post production now plays an even bigger role.

So the discussion went on and I think that in the end there was an consensus about the fact that the decision of which camera to use should be made, not by the DOP alone, but in conjunction with the DOP. And that the people involved in the decision should be educated as to the different stages of the work flow of the project.

For me the most important word was “educated”.

I am first and foremost a Director, but I have Production responsibilities because I am part owner and my background includes photography.

So I try to be as familiar as I can with the equipment and the work flow that could be involved in a particular project.  Without affecting the quality of the image.

This is one of the reasons I have written some blog posts about the equipment that I use, to share it with the people that might benefit from that experience. 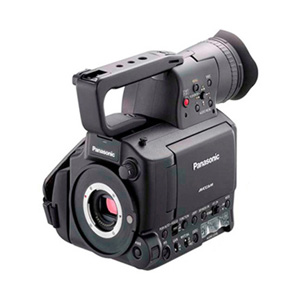 So in the next few posts I will be sharing with you my experience with the AF100 from Panasonic.

Today I am going to share a recipe that my cousin Lucía Cueto (an excellent cook) sent me, it's as mexican as can be, and soooo good!

And yes, you might have to go to a mexican specialty market to get some of the ingredients. Specially "Epazote" and "Hoja Santa". Blend all the herbs along with the tomatillos, chile, garlic, onion, 2 cups of chicken broth and 1/3 cup of Hominy corn kernels. Bring it to a medium boil until it thickens lightly due to the blended corn. Use the powdered bouillon instead of salt. Add the shredded chicken together with the rest of the Hominy corn.

Serve it hot  and make it make it colorful and fresh adding spoonfuls of radishes, onion, lettuce and cracked tortilla chips. SOme drops of lime juice will make it perfect.

You must be careful to balance the flavor of the different herbs so that not one dominates.

UNlike the traditional Red Pozole or White Pozole, I don't add oregano and instead, I use the mix of herbs that should "speak" for  themselves.

You can substitute the chicken with pork or shell fish.

It is next to impossible to get "Epazote" or "Hoja Santa" in the USA, so once you get a hold of some, dehydrate them up and treasure them.